I'd love it if Atlantis had a new feature developed: a window, like a control board window, on which text with formatting could be copy and pasted from files while remaining open no matter what file is displayed. This would save time when wanting to have before your eyes text in an accessible window when switching between files. I guess it would work like a standard text file, but set to wrap to borders, forming a side panel.

I work quite often with 20+ files open, and this would remove the need for me to have a second word processor or note app displayed in order to view, cut and paste various segments of text while switching between different files.
Top

You could try using Ditto clipboard manager. It is free and has a portable version. What’s more, it has an option to always stay on top: 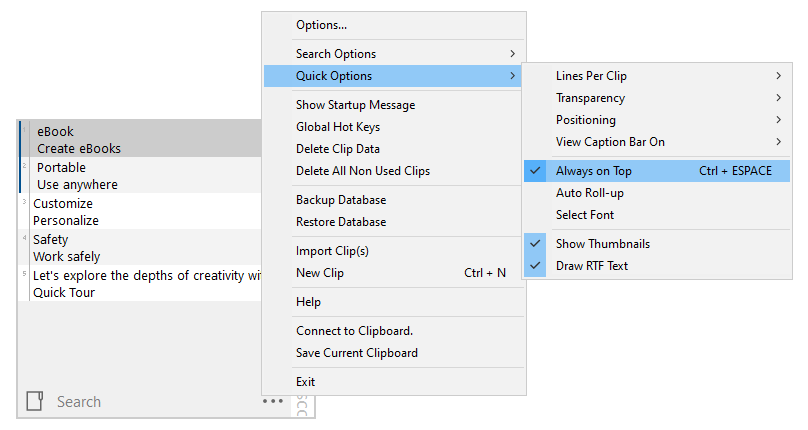 When Ditto is displaying on top of the Atlantis window, you can copy/paste clip items without losing sight of the current Atlantis document window.
HTH
Robert
Top

Thanks for the answer. I've tried various clipboard managers before, but they don't really deliver what I'm after because I'd like to leave some text in place and add more text, and cut it, at will. In other words some text will be from clipboard, some won't because it'll be left in situ between sessions. Not sure I'm explaining that well, but basically an rtf. file open as a side panel would in my particular scenario perfect. Currently I'm relying on Polyedit for this, which is good for this purpose but getting very old, whereas if Atlantis integrated such a panel it would be a feature and a benefit to workflow (well, to me at least!). It's a subtle distinction I'm trying to point out, and not sure I'm getting my point over, so if it sounds like I really do need a clipboard manager, well... I don't think I do because I also want to be able to retain text set up earlier as well as copy/paste text, and to retain font format.

Ditto does retain any text set up earlier provided it was sent to the Windows clipboard at least once. Included pictures, font and paragraph formats are also retained. The clips can be edited at will. They can be pasted with their original formatting or as pure text. They are retained across Windows sessions.
Top

Thanks Robert, I'll give it a go!
Top

Well I've tried using Ditto for a while, and it is very good at what it does, it's still not delivering what I'm after in practice which remains as shown above. Having a single panel like an rtf. document instead of snippets would fit the bill, at least for me! Not a criticism of Ditto because it isn't trying to do what I'm really after. Anyway, any consideration of this would be appreciated (and so far as I know, it would be a unique feature in the world of word processors).
Top